One element by solving Israeli-Palestinian conflict is the question of refugees or better their right to return. When the “refugee issue” is discussed within the context of the Middle East, people invariably refer to Palestinian refugees, not Jews displaced from Arab countries. The Ministry of Foreign Affairs of Israel has launched a new international campaign entitled “I am a refugee”. The purpose of the campaign is to increase international awareness of a little-known refugee group – Jewish refugees from Arab countries.

Before 1948 nearly one million Jews lived in the MENA region (Middle-East & North Africa) outside of the sc Brittish Palestinian mandate; after a half decade only few thousand were left. A documentary movie ”The Forgotten Refugees” gives some background to these Jewish communities in the Great Middle East. 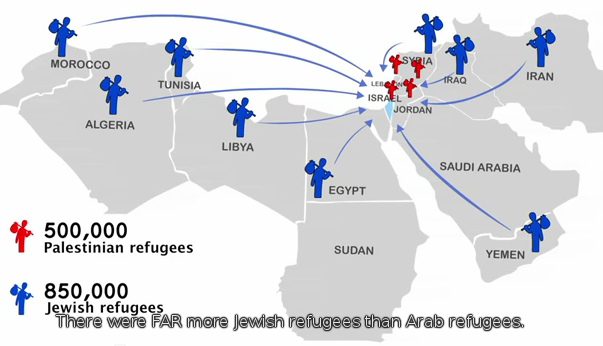 Wider context of the Refugee question in MENA

Thriving, prosperous Jewish communities existed in the Middle East and North Africa ( aka MENA region) a thousand years before the rise of Islam and more than 2500 years before the birth of the modern Arab nations. These communities, which extended from Iraq in the east to Morocco in the west, enjoyed a lively fabric of life and were influential in the local economies. Until the 10th century C.E., 90% of the world’s Jews lived in regions now known as Arab countries.

On Nov. 29, 1947, the UN voted to partition then British-Mandate Palestine into two states: one Jewish, one Arab. Two states for two peoples. The Jewish population accepted that plan and declared a new state in its ancient homeland but the Arab inhabitants rejected the plan and launched a war of annihilation against the new Jewish state, joined by the armies of five Arab members of the UN. As a result of the war, there were Arabs who became refugees. Also following the declaration of the Jewish state antisemitism and anti-Jewish riots broke out in the Middle East and North Africa ( aka MENA region) and many Jews were driven from their homes – between 1948 and 1952, 856,000 Jews from Arab countries became refugees. Every year the Palestinians are commemorating sc Nakba (catastrophe) Day, on which they remember the disaster that befell them in 1948, when they lost their war against Zionism and two-thirds of them were displaced from their homes, becoming refugees. While it is perfectly natural for the Palestinians to commemorate their national tragedy, the date they have chosen carries a clear political-ideological message, and it is not one that will encourage would-be Middle East peacemakers.

Besides humanitarian aspect I could mention an economic one too. In a recent conference “Justice for Jewish Refugees from Arab Countries” Dr. Stanley Urman, the executive director of Justice for Jews from Arab Countries, noted that Jewish refugees lost property worth $700 million (around $6 billion in today’s terms ), while Palestinian refugees lost property worth about $450 million (around $3.9 billion in today’s terms ). Since 1950, he said, Palestinian refugees have received $13.7 billion in U.N. funding, whereas Jewish refugees have received just $35,000. (Source Haaretz )

At least two aspects explain why there are still refugees after more than six decades:

According UNRWA criteria the refugee status is given not only to the original refugees whose normal place of residence was Palestine between June 1946 and May 1948, who lost their homes as a result of the 1948 Arab-Israeli conflict AND their descendants in the male line. So it isn’t just the first generation that is entitled to this aid, as is the norm for all other refugees the United Nations helps, now the fifth generation is also entitled.

Originally UNRWA was established as a temporary agency. One motivation to agency’s refugee definations might be economic aspect. An article ”Palestinians Refugees Forever” in Haaretz gives following background:

UNRWA states that the Palestinians are occupied – indefinitely. UNRWA has financial and political interests in maintaining this fiction: as long as the Palestinians are refugees, UNRWA is in business. Of the 30,000 people that UNRWA employs, the vast majority are Palestinian: UNRWA is the largest single employer of Palestinians in Gaza and the West Bank. Contrast this to the UN High Commission for Refugees, that only employs 5-6,000 people globally, and which focuses far more clearly on resettlement and rehabilitation of refugees and building new lives, and not on maintaining services that prop up the status quo. (Source Haaretz )

Millions of Germans who had lived in the Sudetenland and were kicked out at the end of WWII (3 years before 1948). They were not allowed to return and they are no longer refugees because Germany absorbed them. Finland settled some 10 % of its population from territories occupied by the Soviet Union, which from its side transferred new population to new regions. Around 45,000 Hungarians were deported from Czechoslovakia to Hungary, while around 72,000 Slovaks transferred from Hungary to Czechoslovakia, and they are no longer refugees either. Hundreds of thousands of Cypriots who were kicked out of their homes were also not allowed to go back to them, and they are no longer refugees because their fellow nationals on the other side of the island absorbed them.

One aspect with “right of return” should now be highlighted: A recent ruling by the European court of human rights declared that due to the time that had elapsed, Greek refugees expelled from northern Cyprus in 1974 would not be allowed to return to their homes. Now while, tiny Israel absorbed the Jewish refugees, but the vast Arab world not the Palestinian refugees – defined by unique UNRWA criteria – the discussion of ”right to return” has so far been quite one-sided.

Earlier Israel’s Deputy Minister of Foreign Affairs Danny Ayalon published his view in informative video ”The Truth About the Refugees” explaining the historical facts relating to the issue of refugees in the Israeli Palestinian conflict.  This video also highlights the issue of the Jewish refugees who were forced out of their homes in the Arab world, and were subsequently absorbed by the State of Israel.

Unsolved Israeli-Palestinian conflict squanders resources which in more peaceful circumstances could be used for capacity building of civil societies. Keeping refugee question and land dispute on the top of their agenda Palestinian Authorities favor temporary solutions and relief instead of building more permanent institutions. On Israeli side the defense and security takes more and more resources, e.g one Iron Dome missile to drop one Quassam rocket costs nearly $ 100.000. Then there is also a question about effectiveness of foreign aid, but that is the other story outside the issue of this article (see e.g Placebo effect for people and society with 20 bn bucks).

In my opinion the Palestinian refugees should be rehabilitated in their place of residence just as the Jewish refugees were rehabilitated in theirs – Israel. There should be an immediate discontinuation of the perpetuation of the Palestinian refugee issue. The rehabilitation process implemented this way would minimize the demand for the “right of return” during peace talks so one problem less in agenda.  Sure few years ago there was a preliminary agreement about Palestine returns in Israel but the number was rather symbolic ( 5.000 ).  In any case the insistence of some Palestinian refugees to be given a right of return will be resolved by their immigration into the future Palestinian state that will be established through a peace agreement.

In my opinion the refugee problem described above has some similarities with situation in Serbia after Balkan wars. In Serbia still lives over 200.000 refugees and IDPs (internally displaced persons). Like return of Jews back to Arab countries, like return of Palestinians to Israel or West-Bank as well return of Serbs back to Croatia or Kosovo the numbers of returns are insignificant e.g due security reasons. From my point of view to solve refugee/IDP problem the rehabilitation process in the place of residence is good alternative and international aid should be redirected e.g towards effective housing programs instead of keeping alive unrealistic dreams about going back to square one.

Some of my related articles:

Out of Topic: Epilogue Lite